On the eve of my 28th birthday, I decided to re-watch Legally Blonde.

Yes, for the umptienth millionth time.

No. It was not a waste of time.

After watching it, I couldn’t help but reflect on the things the movie taught me and, you might think I’m crazy for saying this, how the film influenced my own life.

Elle Woods taught me a number of things, and those didn’t just involve the finite rules of hair care, the necessity of having my nails done, or that a girl’s life is almost always improved by having a tiny dog in her life (although all those things are certainly true).

Elle Woods taught me that:

1. A silly girl need not always be silly. Growing up (and still today) I have always been, shall-we-say, bubbly? This frequently resulted in me (and my ideas) being taken less seriously, especially in high school. I subsequently assumed that due to my demeanor, which was not unlike Elle Woods, my ideas were petty and unimportant. (And, let’s be frank, a lot of my ideas in high school, were darn right ridiculous.)

But from Elle Woods, I learned that just because I was silly today, didn’t mean that I couldn’t be serious and thoughtful tomorrow.

Elle Woods picked herself up by her bootstraps (sometimes for the wrong reasons, like getting her bum boyfriend Warner back), studied for the LSAT, and got herself into Harvard Law. And while her initial motives for being there were silly and petty, she trained her affections to desire more important things. In other words, she learned to love and aspire to things that mattered, like using her legal knowledge for others benefit (that scene where she gets Paulette’s dog back is a definite favorite). 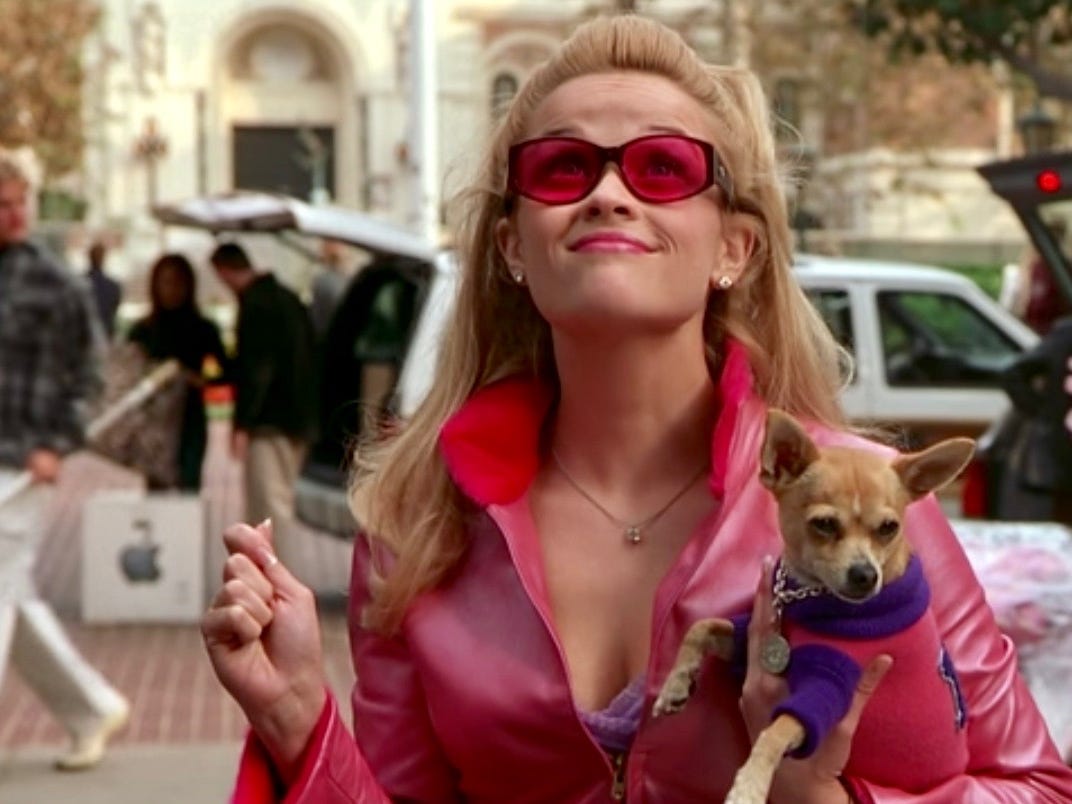 2. Boys aren’t everything, but a good one is worth fighting for. Elle’s tragic romance with wealthy, elite, and pig-headed Warner was a sight for sore eyes. Her sad efforts to impress him and get him back by gaining admission into Harvard were demeaning. But that wasn’t the end of the story. As a genre, rom coms tend to land the lead female protagonist with a guy exactly like this — in other words, a guy not worthy of her affections, much less her talents. Legally Blonde turns this narrative on its head. Instead of Elle ending up with the jerk, she ends up with kind and discerning Emmett who nurtures her gifts and talents, tells her she’s worth more than her good looks, and actually makes her a better person. He’s a true gentleman, willing to trust her and her judgment, to defend her honor when it’s under threat, and is talented in his own right. Legally Blonde taught me that you can be an intelligent woman, desire and attain the companionship of an intelligent gentleman, and yes, live happily ever after.

3. Life is 90% about grit and 10% about just being along for the ride. From the start of the movie, it’s clear that Elle Woods is the least likely candidate to go to law school, much less one of the most prestigious law school’s in the county. She’s a sorority girl who studied fashion and retail marketing at the equivalent of UCLA. This is not a serious person with a serious future beyond marrying one of Belair’s many billionaires — or so the narrative goes. But she decides that the future society tells her she should live (or desire) is not the one she wants or should want. And she demonstrates that hard work and discipline reap far greater dividends than the alternative.

My favorite scene in the movie comes right after she’s scorned by Warner and realizes that she’s at law school for more reasons than just to get her loser boyfriend back. She gets on her treadmill, spends countless hours studying in the law library, and stops feeling sorry for herself by deciding to take ownership of her future. From Elle Woods, I was inspired by the value of hard work, and learned the notion that if, at first, you don’t succeed (i.e. & don’t get Warner back) then get a better dream & work hard to achieve it.

I love this mentality because it’s one that I observed firsthand from my Dad.

My Dad was raised by two alcoholics with few hopes for my Dad’s future. He lost his sister to leukemia when he was 6 and she was 5. He witnessed his Mom date one loser after the next. His own Dad was homeless for most of the latter half of his life. He had no role models. My Dad was the first in his family to graduate from college and later graduated from law school, which he got through by working full-time, coaching his 5-year-old daughter in soccer and baseball, and caring for me and my Mom.

If this isn’t a guy with grit, I don’t know who is!

While my Dad’s story is far more inspiring than Elle Woods’, he was told, like her, that he would never amount to anything. But by God’s grace, he embraced a vision for his life and family greater than he had witnessed in his own family’s lives.

So that’s it. My musings on the inspiration of Legally Blonde. For better or worse, I think this feel-good film did a lot of good in shaping my own dreams and aspirations.

(All photos are not my own. They are screenshots from the film, Legally Blonde.)